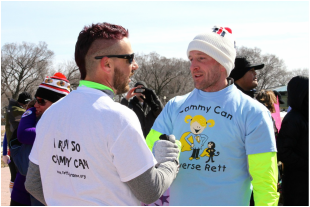 It all began in the spring of 2000,  Coach Wintermute to complete his student teaching at Prospect HS and he coached alongside Hall of Fame coach, Mike Stokes.  It was there his passion for coaching began and coaching Primo to a win the 800m run at the IHSA Sectional was just the beginning.  It wasn't until the fall of  2002 when Coach Wintermute returned to Prospect High School as a Mathematics teacher and returned as a distance assistant under Mike Stokes that the glory days began.  The Knights XC team earned IHSA State berths in 6 out of the 8 years while placing 4th three times.  The F/S team complied a 44 and 7 dual meet record during those eight years and two F/S MSL Conference Titles and a JV MSL Title.  As a mid-distance runner himself, Coach Wintermute, found a passion in the 4x800 and the team dynamics that make championship relay teams.  During the 8 year span with the Prospect boys program the Knights qualified the 4x800 to the IHSA State finals in all but one year and highlighted it with a State Championship in 2004.  The 4x800 relay placed 2010 (2nd), 2009 (4th), 2008 (4th), 2007 (6th), 2006 (12th), 2005 (2nd), 2004 (1st), 2003 (3rd) during those 8 years.

In 2010, Coach Wintermute transitioned to the Prospect Girls program to learn from the great one, Dave Wurster, in hopes of being his successor.  During his four year as a distance assistant coach under Coach Wurster, the Knights enjoyed many great successes and set every distance school record on the track. On the track the 4x800 magic continued with a four more trips to the IHSA State Track Meet and placed 5th, 3rd, and 4th.  In XC the team earned three trips in four years to the IHSA State XC meet and placed 5th twice while holding a national ranking in three of those four years.

In 2014, Coach Wintermute took over as the head coach of both Prospect Girls Cross Country and Track & Field.  He thanks all those that helped him get to this point: his wife and family, the athletes, Mike Stokes, Mike Kamedula, Dave Wurster, and his high school coach, Mike Kuharic.  Today he trains to stay fit (a few marathons, a half Ironman, etc.) and runs for Cammy ("Cammy Can") a dear friend of his and an inspiration to all.

In high school, Coach Wintermute, attended Lyons Township in LaGrange, IL and was a three sport athlete.  He began his career as a football, basketball, and track runner and by junior  year he was a runner (cross country, basketball, and track).  He said, "I was always into sports that had a component of  running but it wasn't until high school that I realized I was much better at running than these other sports."   He was fueled by the intensity of competition and the desire to train to be the best so as the transition away from football and basketball happened his love for running emerged and success followed.  In track, Coach Wintermute ran the 2nd leg of Back-to-Back (1995 and 1996) 4x800 IHSA State Championships with Eric Espinosa, Alan Hasler, and Chris Stanley.  "We committed to each other, lifted everyday in the winter, and strengthened bonds that were crazy powerful.  This is what made us great."
Lisa Cottrell - Prospect HS Assistant Coach (2008-present)
Assistant Coach (2007)-Rolling Meadows HS (boys & girls),
BA: Northeastern Illinois University (1995) Special Education
MA: Northeastern Illinois University (2004) English (Literature)
MS: National-Louis University (2011) English (Written Communication)
Upward Bound Instructor (2005-present) - District 214
Lead High Ropes Course Facilitator (2006-present) – District 214
USTFCCCA Level 1 Coaching Certification (2013)
Be-Activated Level 1 Certification (2015)

Coach Wurster retired in 2014 to kick back and enjoy some worldwide traveling.  "Moose" as he was known by many was meticulous in his field and knew how to get the most out of each of his athletes.  He was passionate about each kid he taught and coached  and challenged them to be the best versions of themselves.   Coach Wurster poured every ounce of energy into developing each athlete and made us all think about how to do things a little bit better.  His passion and love for running was contagious to all that he came in contact with and he left Prospect HS as one of the best T&F and XC teams in the State.  Below are some of his team's outstanding accomplishments.